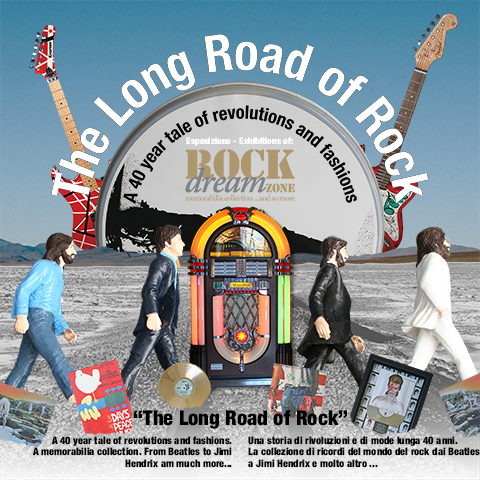 “The Long Road of Rock” Who knows where it will take us?

UK/IT Version – “The Long Road of Rock” Who knows where it will take us?

someone asks us to recount our adventure as collectors we usually start at the beginning, from when we were kids dreaming of the stage at big rock concerts. Today, we want to start at the end, from this 21st August 2022, the closing day of our exhibition “The long Road of Rock” shown in Morcote, thanks to the willingness and cooperation of the Morcote municipality, and what, once the front door was closed, remained. 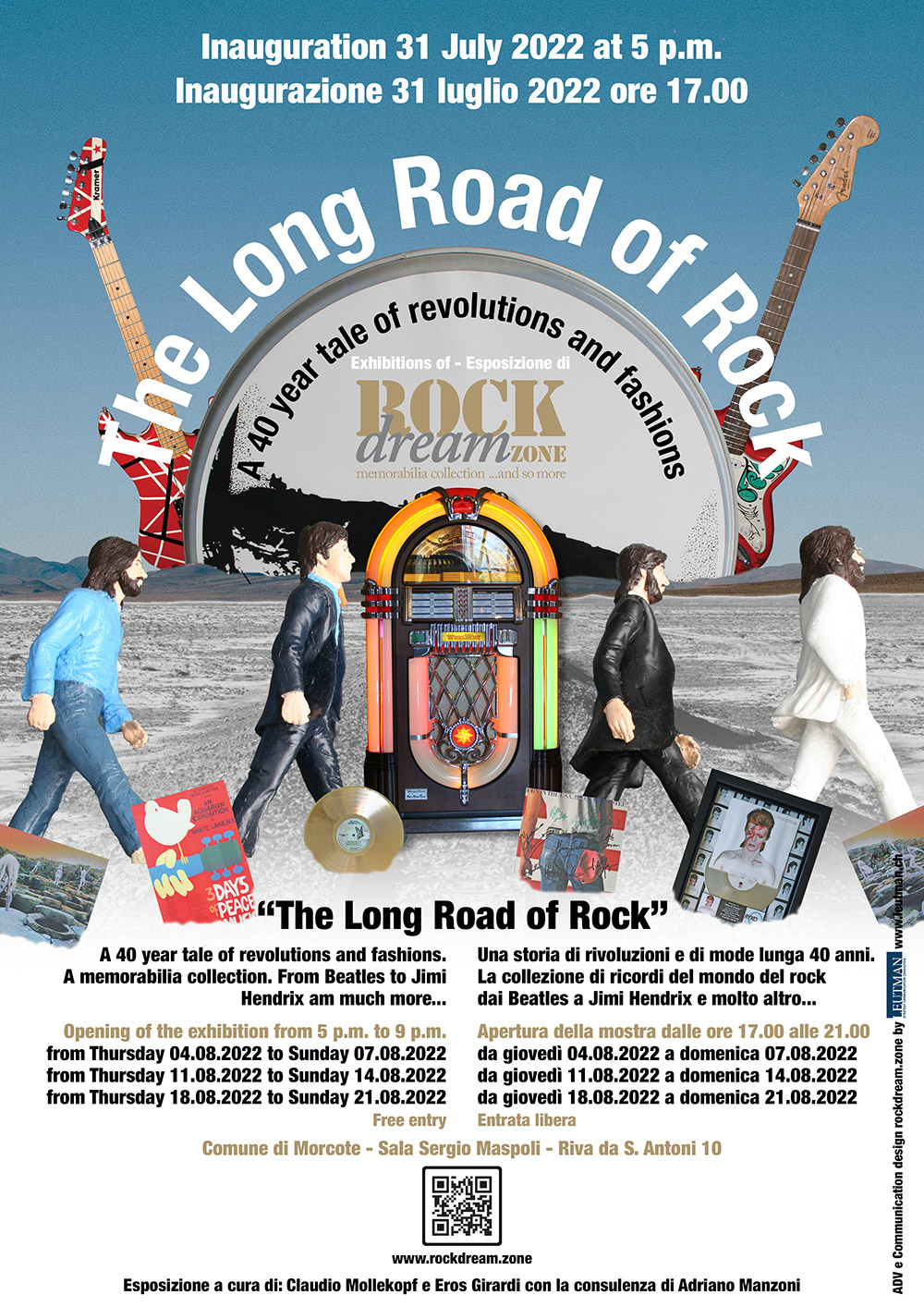 Satisfaction, certainly a lot, just think that according to the Morcote municipality’s own press office, our exhibition was the event with the highest number of visitors among the events, not only in summer 2022, but ever held in Morcote.

The credit for such unexpected success? We do not believe it is ours, or rather, without being false modesty, not only ours, but it is mainly Rock, which, as we have always maintained, will never fade, because Rock is not just a musical genre but much more.

Rock is a lifestyle, it’s a concept, it’s a feeling you carry inside you. It doesn’t matter if you are 16 or 70 years old, if you wear trainers or vacheros boots, if you still have long, windswept hair or a few grey wisps on your temples, if you feel rock you carry it in your heart, always and forever.

What remains behind that closed door behind us is an enormous joy at having been able to revive that passion, or rather that Rock love, for so many people who, on seeing our ‘pieces’, rediscovered part of their 60s/90s Rock feeling that they thought had disappeared but was instead just tucked away in a corner of their hearts covered in dust, but never buried.

But it was not just an exhibition for nostalgic “oldies”. On the contrary, there were many, many young people, certainly more than we expected, who showed us that they belonged to this great family with a great knowledge not only of the “classics” of Rock such as Pink Floyd, Beatles, Rolling Stones, etc., but also of lesser-known artists who are less well-known to the general public.

Other young and very young people, sometimes with their “oldies” beside them, showed great interest and curiosity in this ‘road’ of Rock that was accompanied in the exhibition by iconographies of the events, decade by decade, in which Rock has always been immersed, enveloped, involved and often a driving force. 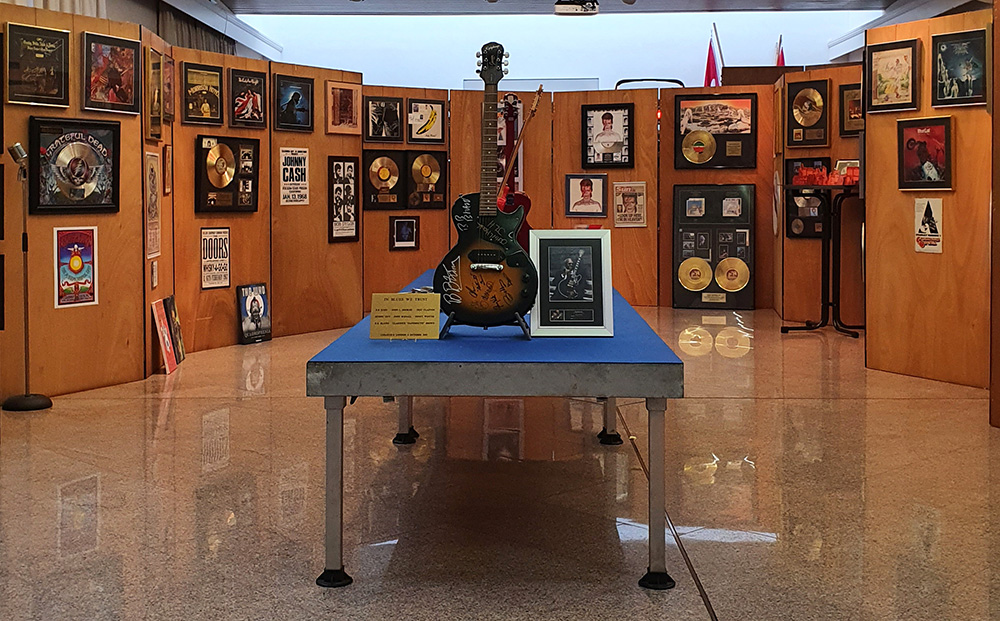 Yes, rock is also this, or perhaps above all this, the mirror of an evolution and sometimes a revolution in our society and culture since the fusion of rhythm and blues and country in the mid-1950s in the USA gave birth to rock and roll, which from then on embodied the rebellious spirit of the new generations.

A spirit that has never faded and which we are sure the new generations will also be able to “carry on their shoulders” with pride and love for the good of all. Let us always remember that Rock is not just that iconic representation of leather jackets, studs, drugs and highs, but is, and always has been, above all the voice of social commitment to the rights of the weakest and minorities, even if at times, as happens in the best of families, it may have overstepped a few guardrails.

But back to the two of us and our great satisfaction with the exhibition “The Long Road of Rock”. 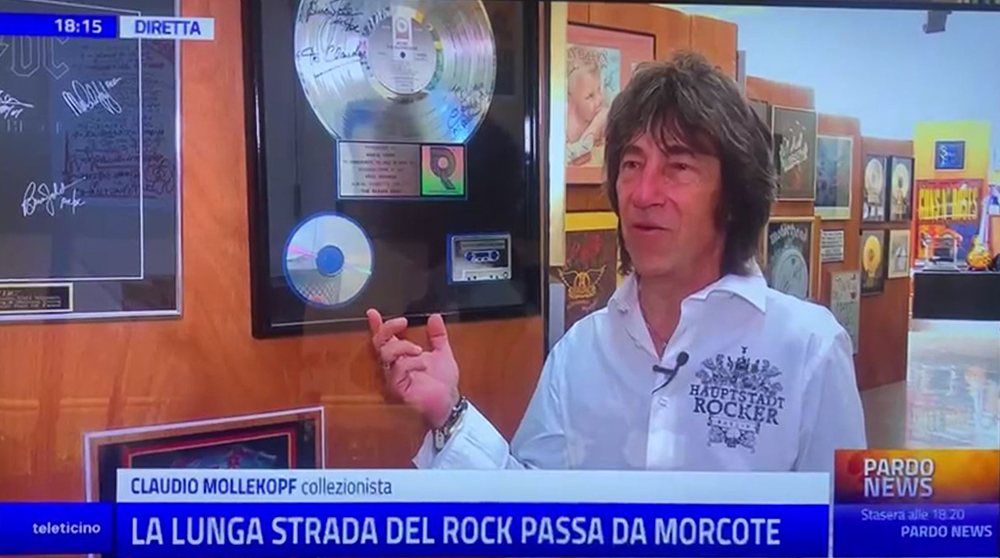 Even in the past, such as in 2019 at the Palacinema in Locarno with the exhibition “Rock Museun” or in 2014 at the CineStar in Lugano and even earlier in 2010 with the exhibition “The history of music” at the Julius Baer Bank, we have exhibited part of our collection, but in all of them, although always to great public acclaim, it has never been as with this latest experience in Morcote.

What made the difference between those experiences and today’s was not so much the “material and unquestioned” value of our collection, which has become more and more enlarged and embellished, but the realisation of its added value as a testimony to the time and events in which the various pieces of memorabilia were immersed.

We always knew this, unconsciously perhaps, but we always knew it and every time we “got our hands” on a piece, be it a gold record or a simple concert pass, we knew that we were also putting in the collection the testimony of a moment that was in any case unique and unrepeatable, as every moment in life is, in this case a moment of Rock life with all that we have tried to explain as before.

But it was after the Locarno exhibition in 2019 that our dear and long-standing friend Adriano, began little by little, but with great determination, a work of convincing us to give “form” and “identity” to what until then had been a great passion, but as he claimed, not fully expressed in what was its full potential.

From that moment on, our dear friend was able to bring out and give shape to everything unexpressed that we wanted to say and do, but which certainly needed guidance and an external point of view in order to “make it available” to the entire Rock family.

It wasn’t easy, the two of us took so many things for granted, so many facets, and perhaps we didn’t believe we had the potential to convey our passion to so many people and in such an engaging form as it turned out to be, but as Adriano always said, it was only the tools and a more formed and aware identity that we lacked to be able to express ourselves at our best. 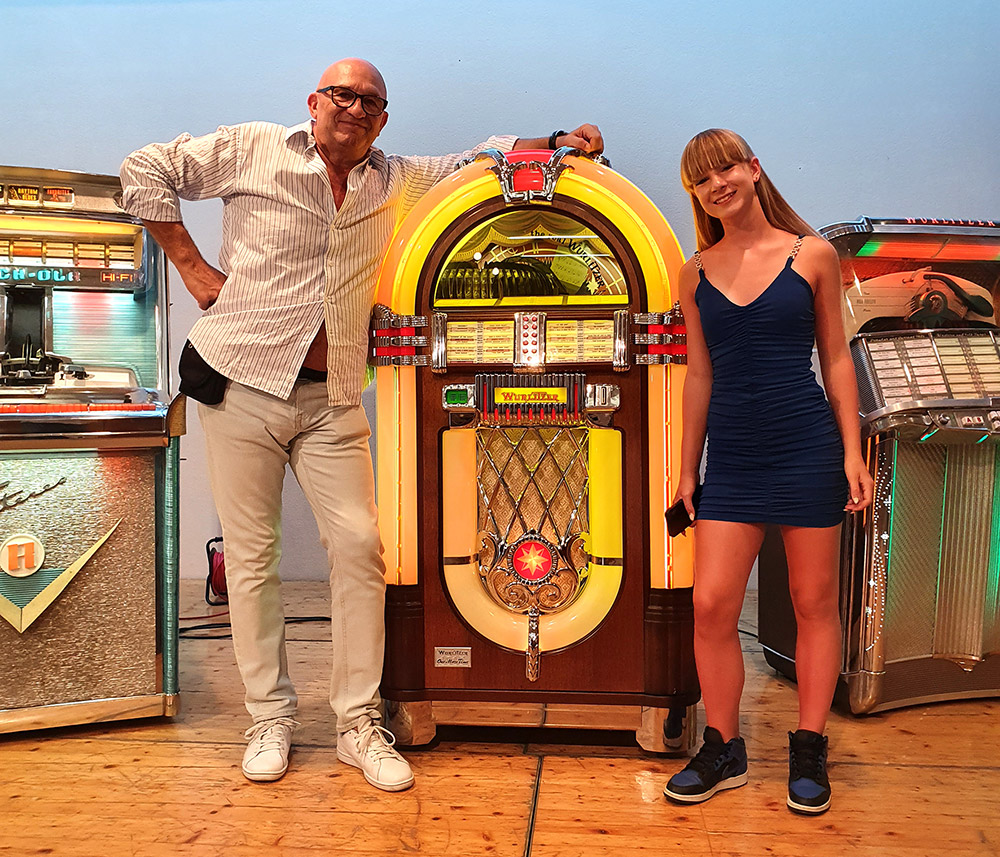 After more than two years of friendly collaboration, which you can only have with those who can understand but also fully appreciate your desires and your aim, which was never speculative, and this is no small thing, we have come to have tools and an identity, perhaps not perfect as Adriano continues to claim, but which have allowed us today to fully express our being and our Rock passion, which is after all what we have wanted since we were “young”.

With great professionalism but even more so with great friendship Adriano accompanied us on this adventure, sometimes getting angry but always smiling at our being ourselves, always Rock.

The two of us had notes and words, “he” helped us find the paper on which to write our music that so many ‘heard’ in Morcote, this was the big difference between yesterday and today.

It was a great experience having been able to successfully share our passion, to be able to tell so many people about the meaning that every single piece we collected has for us and that it represents for ‘the long road of Rock’, but also to see quite a few people get moved in front of an autographed record or a poster of a concert they may have attended 30 years earlier.

It may sound rhetorical but it was indeed a great joy to share certain emotions and forgive us for believing, with hyperbole, that the emotions that Rock, in all its forms and facets, can convey are second to none.

Emotions shared with so many people also thanks to the invaluable work of the Morcote Municipality’s press office, which promoted the exhibition in the best possible way, enabling so many to learn about it, and whom we thank here.

The door to our exhibition “The Long Road of Rock” has closed behind us, leaving us full of joy and enthusiasm. Where the road open before us will now take us no one knows, it is only Rock and Roll.

Thanks again to all the friends who came to visit us.