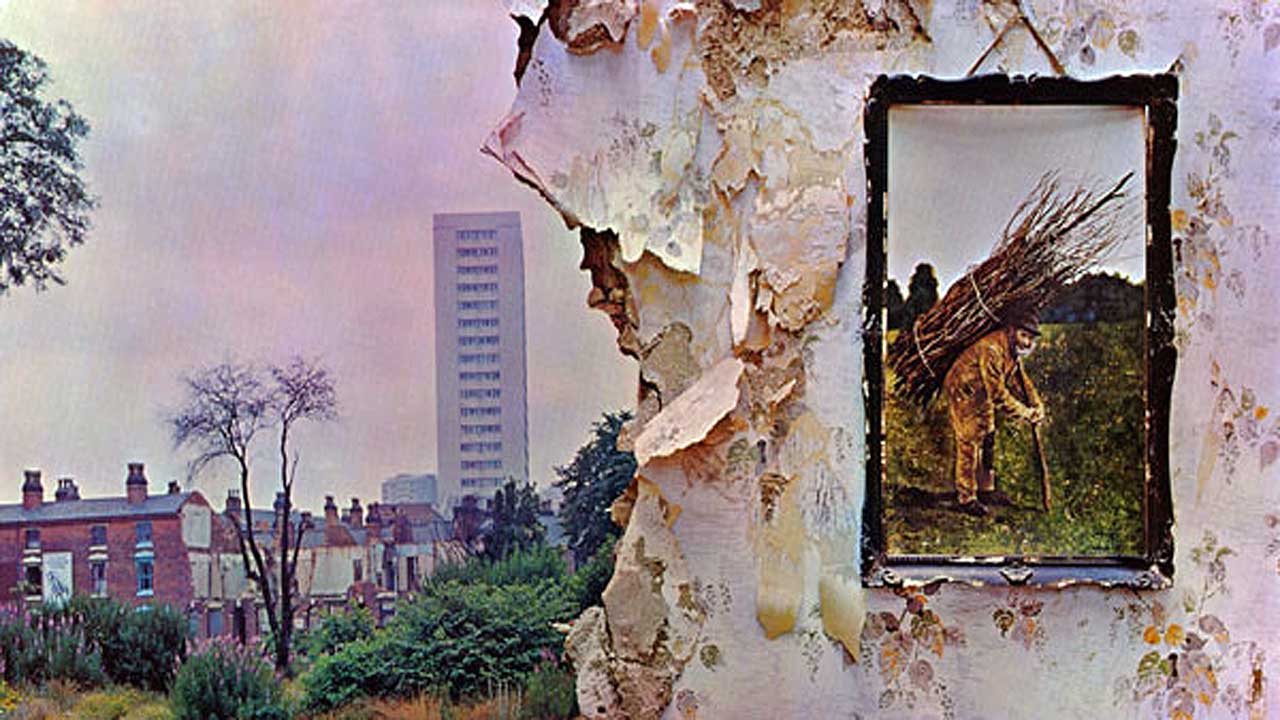 UK/IT Version – It is the golden anniversary of one rock history’s most popular, as well as most important, releases from Led Zeppelin. Officially untitled, what became known as Led Zeppelin IV forged the molten metal template for all hard rock that followed in the Seventies. Yet Page’s superb acoustic guitar, mandolin, and the voice of Robert Plant that all weave and soar like eagles on “Battle of Evermore” (with the late Sandy Denny from Fairport Convention guesting ), “Going to California”, and “Stairway to Heaven” provided the contrast Led Zeppelin mastermind Jimmy Page calls “light and shade”, emulated by pop, rock, and country Artists ever since.

Commercially, Led Zeppelin IV is a juggernaut, selling more than 37 million copies worldwide. In the US, the album was recently certified 24x platinum by the RIAA, ranking as the fifth best-selling album of all time as well as the best-selling album by a British artist (tied with The Beatles aka “The White Album”). Outside America, the album is certified diamond in Canada (x2); multi-platinum in Australia (9x), the U.K. (6x), and France (2x); platinum in Argentina, Brazil, Italy, Norway, Poland, and Spain; and gold in Germany (3x). Led Zeppelin IV also topped the album charts in the UK, Canada, and the Netherlands, and peaked at #2 in Australia, Denmark, France, Sweden, as well as the US, where it remains the best-selling album of the band’s catalog.

Before the success and accolades of 1971, the band first spent the fall and winter of 1970 writing and recording Led Zeppelin IV, with early recording sessions beginning in London at Island Studios in December 1970. A month later, the band moved to Headley Grange, a country house in Hampshire, England. They converted the house into a recording studio and used the Rolling Stones Mobile Studio to record most of the album’s basic tracks with engineer Andy Johns, who also engineered some of Led Zeppelin II and III.

Jimmy Page, who also produced the album, says: “After the brief stay that Robert and I had at Bron-Yr-Aur cottage [while working on Led Zeppelin III], I could see a situation where we all resided at Headley Grange and had a recording truck. I was keen on this whole idea of using it as a workplace so you could concentrate totally on the effort of making the music, while residing at the location.” “It was all a bit experimental,” John Paul Jones says. “But it was the first time we’d actually stayed together. Before, we were recording in studios…and it was always hotel, studio, hotel, studio. We’d never been in one place and had recording facilities there. So that was really a new way of working for us, and I think it was a really good way. We just had this huge old room with a big fireplace with all the equipment set up. And you could just wander down and start stuff up if nobody was there, or if somebody else would turn up, there would be a bit of jam. There was music making in some way all the time, which, as you can see by the result, worked out pretty well.” This unconventional (for the time) approach gave the group more freedom to capture spontaneous performances and moments of inspiration. Of the writing of Stairway To Heaven, Robert Plant recalls: “I was sitting next to Jimmy in front of the fire at Headley Grange. He’d written this chord sequence and was playing it to me. I was holding a pencil and paper and suddenly my hand is writing the words ‘There’s a lady who’s sure all that glitters is gold…’ I sat there, looked at the words and almost leaped out from my seat. Looking back, I suppose I sat down at the right moment.” 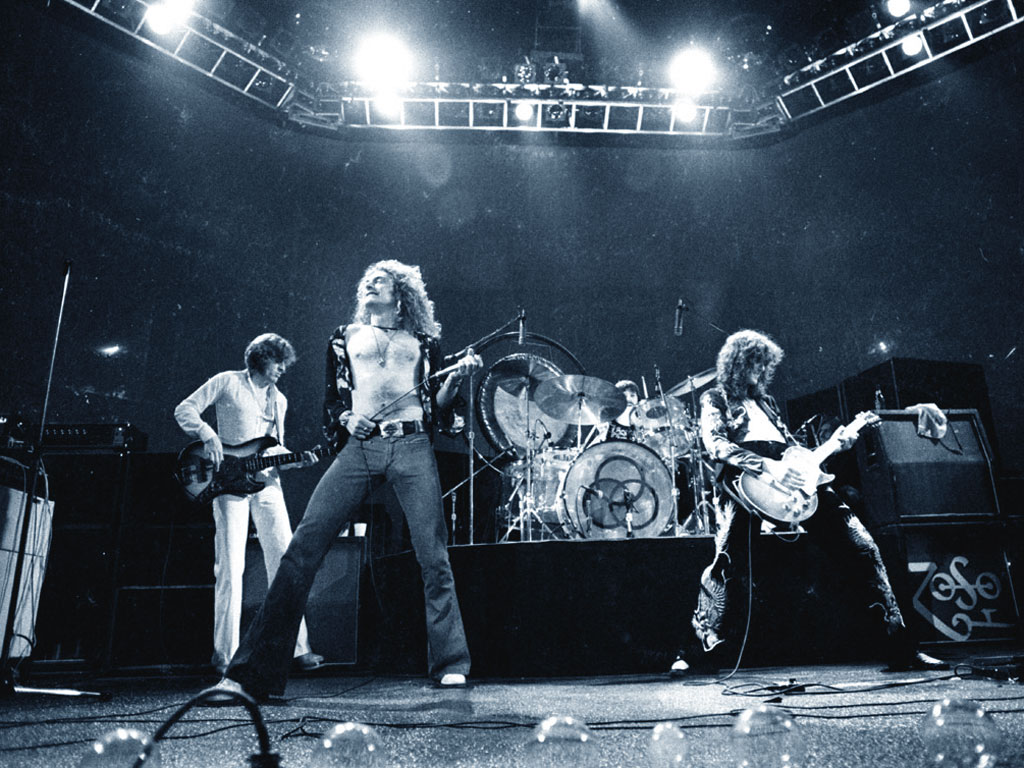 Their previous album, Led Zeppelin 3, while highly anticipated and chart-topping, received mixed and generally unfavorable reviews upon its release in October 1970. This was disappointing for the band, and thus they decided to release their next record without a title or any identifiable markers on the outer packaging; no title, no track listing, nothing at all that tied the album to the band at the time.Part of this included each member choosing an occult symbol that they felt represented them on some level, and the album included these symbols on the inner jacket.

The symbol chosen by Jimmy Page for Led Zeppelin IV has been the subject of much controversy, with some theories even speculating that the Zoso symbol is actually satanic in origin. It is said that Page once explained the meaning of the symbol to Robert Plant, but when asked about it in an interview Plant could not seem to recall the explanation, and Page himself often dodged the question.
The first thing to note is that while the symbol does appear to spell out the word Zoso, it is actually not a word but rather just a symbol that looks like a word. For ease of explanation, though, we will continue to refer to it as the Zoso symbol in this article.
After some serious digging through these old occult books, fans have discovered a symbol that looks very similar to Page’s Zoso in a section of a 1557 book by mathematician J. Cardan called Ars Magica Arteficii, where the symbol appears as a representation of the planet Saturn. This is right in line for Page as his astrological sign is Capricorn, which is ruled by Saturn. It is likely that Page found this symbol in Cardan’s book and then added his own artistic twist to make it palatable to fans of the band.

The symbol that Led Zeppelin singer Robert Plant chose for Led Zeppelin IV is much more straightforward in origin. Depicting a circle around a feather, the symbol represents the feather of Ma’at, the ancient Egyptian goddess of truth, justice, harmony, and balance. Being the lyricist for Led Zeppelin, the feather can also be seen as a pen representing the band’s songwriter. It was taken from The Sacred Symbols of Mu by occultist author Colonel James Churchwood, originally published in 1933, however the symbol originates from the ancient Mu civilization which existed over 15,000 years ago on some lost continent in the Pacific Ocean. The symbol is not very common (that is, until Robert Plant adopted it), but it can be found in both Mu civilization and Red Indian civilization texts.

Drummer John Bonham’s symbol consists of three interlocking rings, also known as the Borromean rings, and can be found in the Book of Signs, published in 1933 by Rudolph Koch. The book explains that this symbol represents an early version of the trinity, and much like the Zoso symbol this one has endured much speculation over the years. The main speculation is that the symbol represents the relationship between man, woman, and child, which has apparently been confirmed by Bonham’s son Jason at some point.

Led Zeppelin bassist John Paul Jones also chose a symbol from Koch’s Book of Signs, but also appears on the cover of a book about the middle age Russian religious cult, the Rosicrucians. Aleister Crowley was interested in this cult because their main belief system indicated that their wisdom was passed upon them from ancient times. The symbol depicts a circle laid over three triquetra, and has been speculated to symbolize a person who is both confident and competent, which Jones certainly is. In ancient times it was used as a symbol for exercising evil spirits, and it was intended to represent the leader of the Rosicrucians.

Led Zeppelin IV also contained a fifth symbol, a smaller one that was used as an asterisk after “The Battle of Evermore” on the album’s inner sleeve. This symbol was chosen by guest vocalist Sandy Denny, who contributed vocals on the track. Also taken from Koch’s Book of Signs, the symbol depicts three equilateral triangles joined at the points. It is mysterious in origin, and the book simply explains that it was an ancients representation of the Godhead.

Anyone assuming that Led Zeppelin‘s allure was limited to the decade of the Seventies, or even the 20th century, simply has not been paying attention: Rock and Roll Hall of Fame induction 1995; Grammy Lifetime Achievement Award 2005; a single performance in November 2007 at London’s O2 Arena had six MILLION ticket requests; recipients for its lifetime contribution to American culture at the Kennedy Center Honors in 2012 awarded by US President Barack Obama; and winners of the Grammy Award in 2014 for the recording of that O2 concert. In 2014 the first three Led Zeppelin albums were re-issued as deluxe expanded editions, with all three debuting in the Top Ten on Billboard‘s album sales chart! The impressive reissue campaign continued with deluxe expanded remastered editions of one of the biggest sellers in rock history: LED ZEPPELIN 4 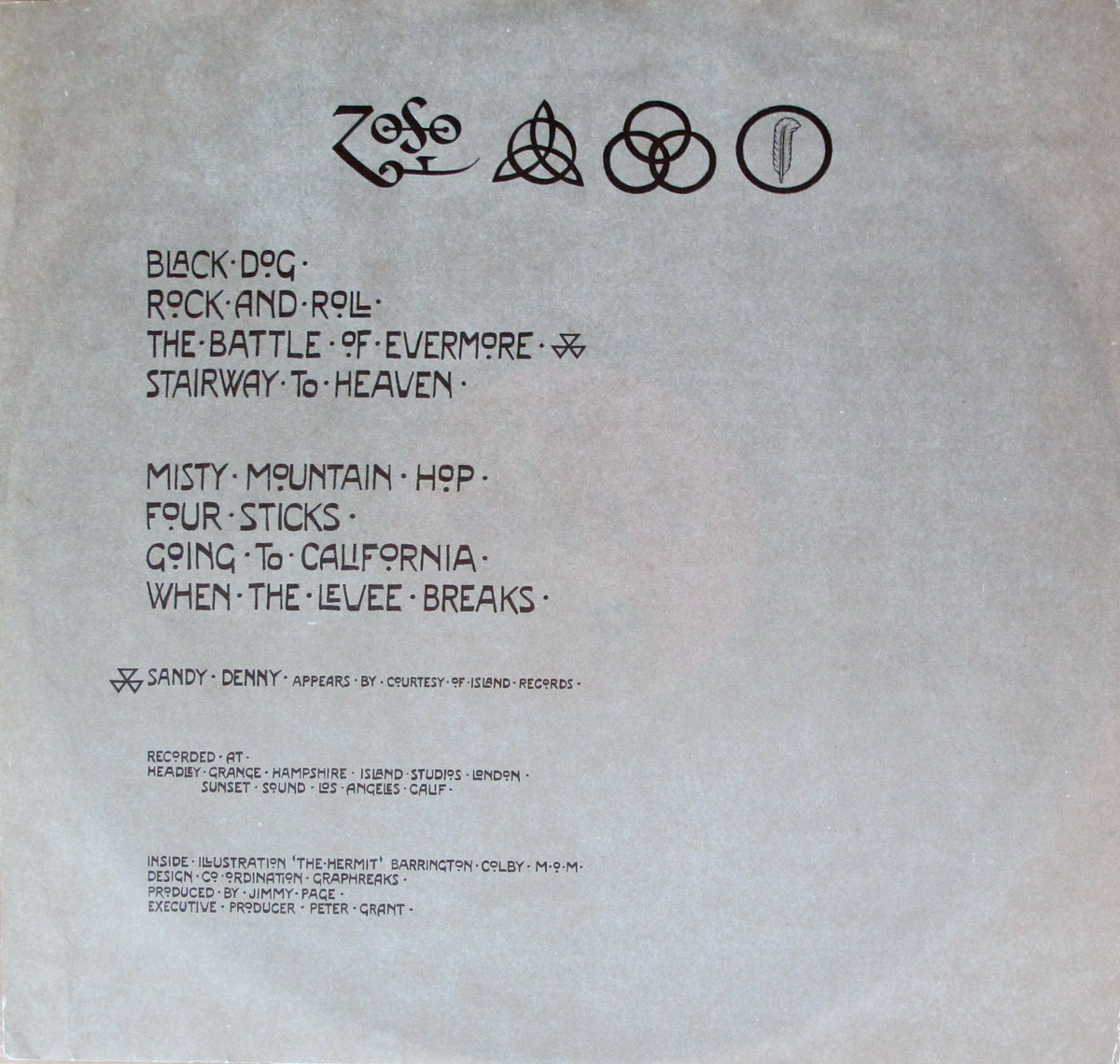 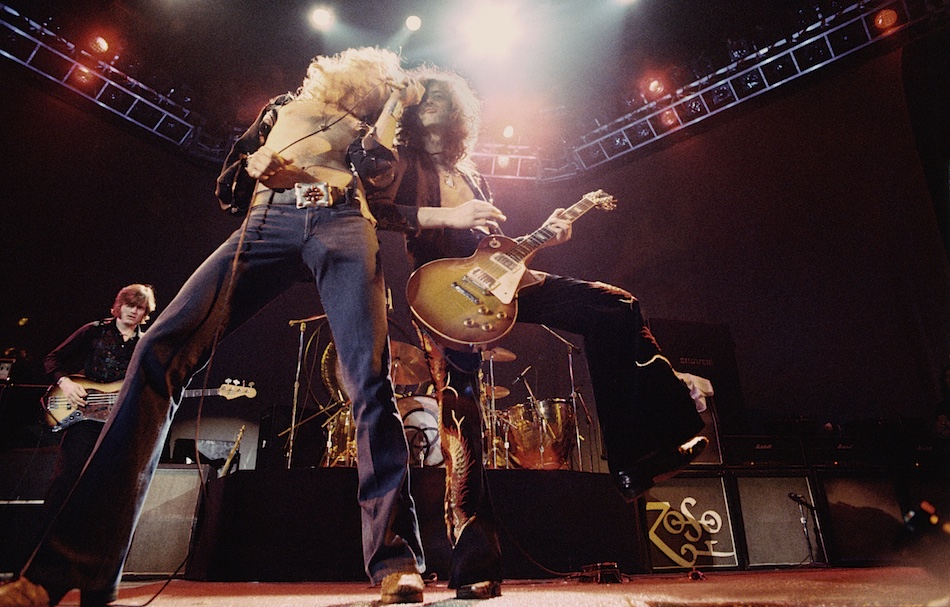